The Ultimate Guide to Alliance of American Football (AAF) Fantasy

The Alliance of American Football (AAF) is kicking off their opening season in 2019 with eight teams and a 10 week regular season. The league is made up of players just outside of the NFL roster bubble – expect to see some familiar names from NCAA football, preseason stars, and other fringe NFL players that are looking for a second chance at making it to The League.

Unfortunately, at the time of the AAF opening weekend, none of the top three DFS sites are offering DFS contests for the Alliance. FanDuel, DraftKings, and Yahoo are taking a “wait and see” approach.

Given that DraftKings runs NFL preseason and CFL (Canadian football) contests with prize pools in the tens of thousands, it seems likely that they would be the first movers.

In the absence of support from the industry leaders, Fanball has stepped up and is offering the kind of games that traditional NFL DFSers are seeking: salary capped roster construction for money, both H2H, Double-Ups, and GPPs. The contests are small, but it’s all that currently exists in the AAF DFS world.

Fanball is a newer DFS site, but part of a larger platform that includes well-known fantasy football products like MFL10s “Best Ball” Leagues, LeagueSafe (cash escrow for season-long leagues), and the NFFC championship – so you should have confidence that the site is legit.

The official AAF app launched with a new type of fantasy game. AAF CEO Charlie Ebersol compares it being a virtual coach: you try to predict the next play in real-time as the game is happening. Will the offense run or pass? Who will score the toucdown? Will there be a turnover? 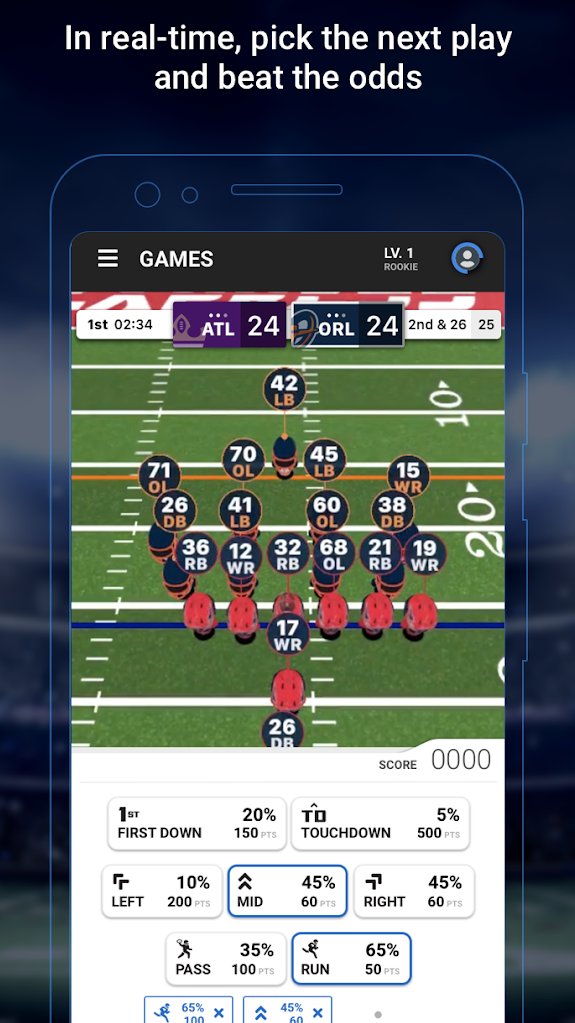 Players earn experience points by guessing correctly and can level up inside the app. It is not clear if there are any prizes or benefits from leveling up or if it’s just a fun way to second guess the coaching staff.

PrizePicks is a new fantasy option that combines fantasy football and traditional prop bets and parlays. You pick multiple fantasy-based props and if they all hit, you win a multiplier of your bet (based on how many picks you make). PrizePicks offers AAF players (among other sports) as an option.

The props adjust in real-time – if lots of people are taking the over, the line adjusts so you may be able to gain an edge but monitoring the changes throughout the week as news breaks.

The AAF has partnered with MGM as the official sportsbook partner. Players in eligible states (NJ, NV) can wager on AAF games with the myMGM and/or playMGM apps.

None of the mainstream sites (ESPN, CBS, Yahoo) have season-long AAF. A new league with a 10 week season and only eight teams can make it tough for traditional 10 or 12 person leagues – there simple will not be enough players to go around and will little to no information on rosters ahead of the season, drafting would be a crapshoot.

Nevertheless, there is a grassroots community of folks playing season long AAF fantasy at AltFantasySports. It’s not going to have all bells and whistles of the multi-million dollar established fantasy brands, but it’s the only option if you’re looking for season-long AAF action.

The success of the AAF may come down to how well it engages with fantasy players. We’ve seen huge surges in interest in leagues like the WNBA and NASCAR after they embraced daily fantasy sports.

The AAF is making a big bet on real-time data, bettings, and analytics, but until it can tap into the massive potential by unlocking fantasy players looking to fill their time during the NFL off-season, the future is uncertain.