Like last week, I tried to max-enter every guaranteed contest. This week there was more interest in the league and sites like The Action Network, FantasyPros, and RotoGrinders were putting out content. The OG Evan Silva even did a Matchups column and was in nearly all of the contest lobbies. Exciting times!

My experience with the CFL DFS tells me that you need to quickly figure out which players are actually good and which players just had good first week performances. Everyone playing in week two is going to be using boxscores to drive their lineups. The edge comes from being able to pick the players that will continue to produce week after week.

I think the big questions for this week were: who are the top offenses among Arizona, Orlando, Birmingham, and San Antonio?

Which of the three top performing WRs in week one would repeat? Quinton Patton, Rashard Ross, Jalin Marshall?

Would either Charles Johnson or Mekale McKay bounce back after huge ownership in week one?

After answering those questions, roster construction became pretty clear as pricing on Fanball was a little soft as we still adjust to these players.

McKay lead the league in targets in week one (12) and caught 5 balls for 80 yards in week one. He also had a long 40 yard pass overturned by review and was targeted twice in the endzone. McKay was solid but just missed having a monster week. I wanted to go back to the well for McKay – who I thought was the top overall WR and might be slightly under-owned after the week one TDs from Marshall, Ross, and Patton.

I was mostly off of Arizona last week. While they were projected to be the top team in the league by Vegas, there was a lot of confusion over who would be the starting QB and what the WR usage would look like. After one game, it was clear that Wolford is the guy in the Arizona and looks like a bonafide MVP candidate. Wolford exploded for 4 TDs and added 8 rushing attempts – cementing him as the elite floor and ceiling play.

Quarterback is very thin in the AAF at the moment. Garret Gilbert and John Wolford are really the only options. So I was locking in Wolford, who was not much more expensive than the field at $6600 and playing a bad Memphis team.

Based on the week one RB platoon report, we knew there were only a couple of likely bell cow options. Trent Richardson was one, but was listed as Questionable all week and backup running back LaDarius Perkins had 6 targets last week. Also, I hate rostering Richardson. It was the same dilemma when he was in the CFL: he’s not an efficient runner but he’ll find a way to fall into the endzone and ruin your day.

I thought #JhurellCow would see the bulk of the workload for the best offense in the league, playing against bottom-feeder Memphis. Game script was set up for an Arizona blowout, as Vegas had the Hotshots as a massive 16-pts road favorite. Pairing Pressley and Wolford meant I should have lots of TD equity for Arizona.

Patton and QB Luis Perez had an obvious connection in week one. Patton led the league in receiving with 107 yds and a sturdy 7 targets. With other starting WR Amba Etta-Tawo ruled out for the Iron, Patton figured to be the target hog. I was concerned about his drops – he only made 3 catches on his 7 targets – but felt like I need to get him into my lineup based on his projected huge ownership. Many of the others folks in the AAF fantasy community were high on Birmingham’s offense this week and this was where I chose to get my piece.

I needed to get exposure to the Orlando Sun N Gun offense and Marshall’s price ($5300) was too cheap. He scored 2 touchdowns (one receiving, one passing) in week one and his piece had not been bumped up high enough. I liked Charles Johnson but I couldn’t hit his $6000 tag and I wasn’t sure about his usage after leaving week one with an injury. This play was a bit of a block as well, since Marshall figured to be Chalky after scoring 18 fpts in week one.

I was left with one spot for SD WR Brian Brown, the consensus min-priced lock. He was starting for the Fleet, had 5 catches for 66 yards last week, and was going against a dreadful Atlanta team. He was the free square this week.

It was a bad week for my cash squad. I even late-swapped from Brown to RB Paul James – a super thin play who ended up getting zero touches – to avoid drawing dead during the last game. I went heavy on Arizona and bounce-back candidate Mekale McKay. I correctly identified that Birmingham was not an offense to target and Orlando was, but had the wrong pieces.

I went Patton over Ross (9 pt swing). I went Pressley over Richardson (15 pt swing). I prioritize McKay, which pushed me off Johnson and onto Marshall (17 pt swing).

I’m happy that I was able to narrow down to a really good player pool (see GPP results below), but I made the wrong calls and locked in on McKay. His high salary shaped my roster construction, taking me toward the $5k receiver range (Patton, Marshall) instead of the $6k range (Johnson, Ross).

My stubbornness to not play Trent Richardson did not help. I was playing one of Pressley or Richardson. When I went Pressley and Wolford, I did not want to also play Ross – which helped me rationalize Patton. 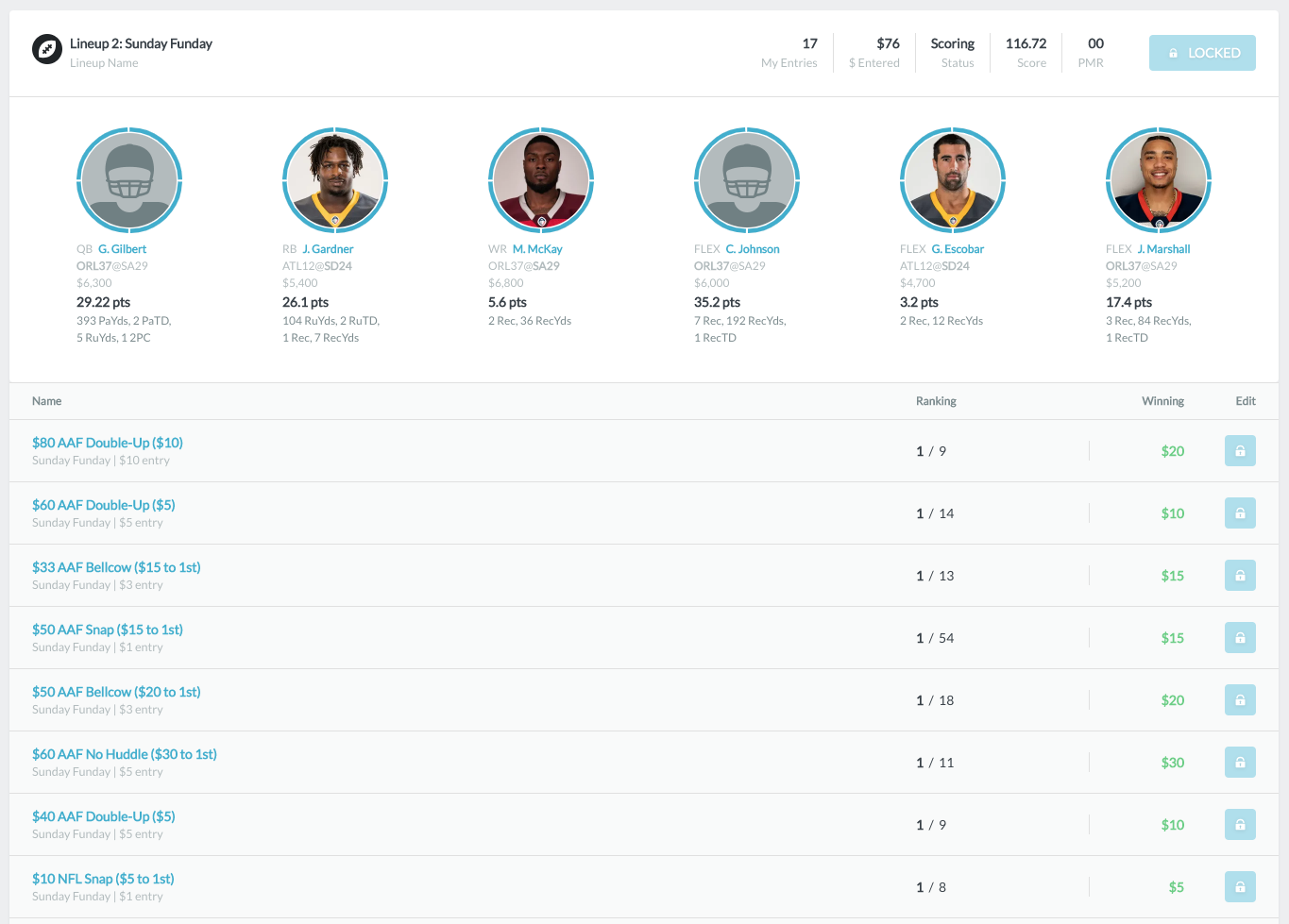 I swept a bunch of the smaller GPP and was top 5 in the bigger GPPs.

Until late into the final game of the week, I was in the red. But my GPP equity in Gardner (RB4 in our weekly rankings) pushed me over the line. His first TD got me to break even and his second TD booked me a profit.

After two weeks in a row with bad cash lineups, it is maybe worth re-evaluating my game selection.

The 9-man double ups have so much overlap of the chalky players (often 4 of 6 plays are 100% owned) that there is not really much room for error. But at this point, it’s hard to get a ton of action into play so we’ll see what the lobbies look like in Week 3. Onward!