When I started this series, I knew there would be a week like this. And I knew it would suck to write about it. Time to rip off the bandaid.

I got absolutely wrecked on Fanball this week.

I built lineups poorly, I entered contests poorly, and I got what I deserved.

This week Fanball opened up a big GPP – much larger than in the first two weeks. Based on the bigger tournament and my thoughts on the difficulty of the double-ups that I mentioned last week, I opted to play almost all tournaments this week.

The Big GPP was a 10-max (the largest entry size allowed on Fanball) so I built ten lineups for the main slate. I ended up max entering the whole main slate and taking my “best” four lineups from the set of ten and entering those in all of the other contests.

I built ten lineups and ended up with these exposures:

TE Pool (this should have been a warning sign!) 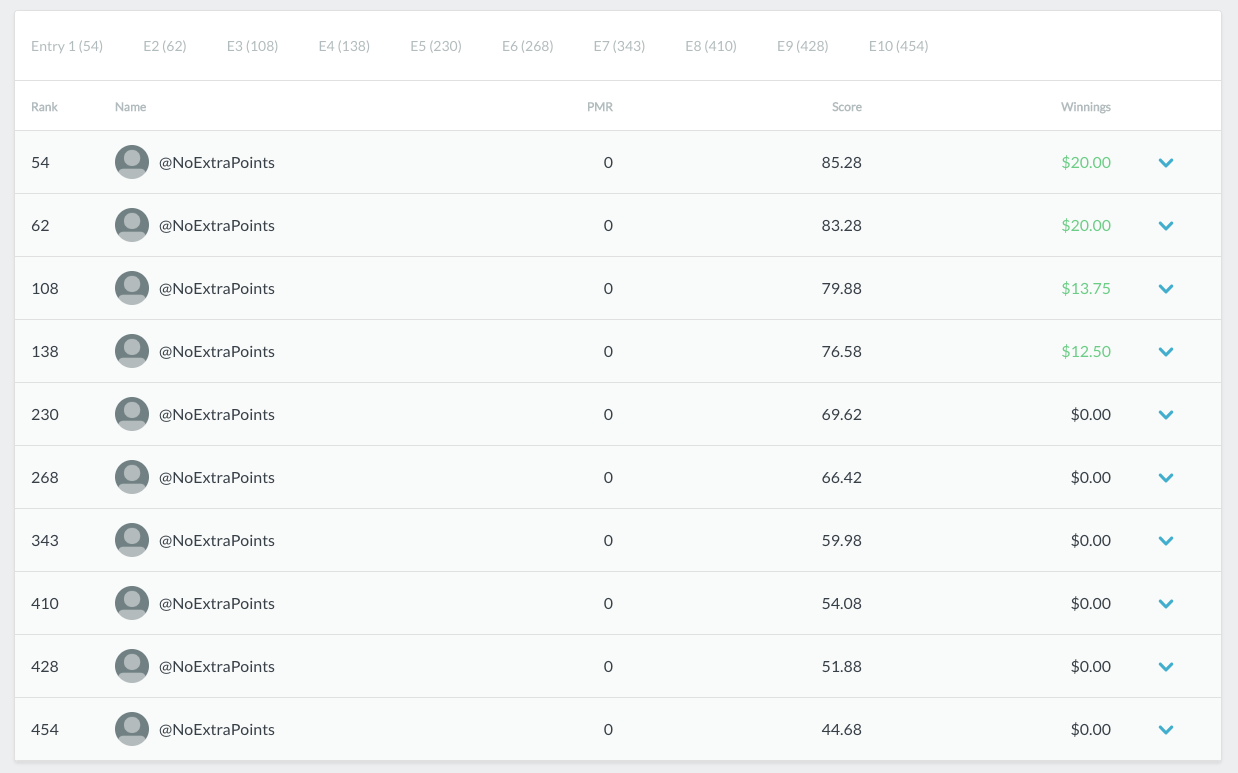 Right from the get-go, I was not following a good process. For the first time in AAF DFS, I used an optimizer to generate my pool of lineups. I thought this would be an edge (I have my own custom optimizer and I don’t think any of the other DFS tool sites are offering AAF support), but it ended up driving me to some really thin plays.

I know better – there are so few rosterable plays in AAF that you can’t get that cute. With only two weeks of data, projections are not going to be good enough to just pop them into an optimizer and spit out winning lineups. But I did it anyways!

I wanted lots of Wolford, Gilbert, Richardson, McKay, Johnson, and Marshall exposure. I wanted it so badly that I did dumb things like playing Tim Cook (flimsy news he might start), Gerald Christian (wrong call on where inactive WR Mullaney’s targets would go), and Anthony Denham (so many air yards! But wait, new quarterback and TEs are a crap-shoot).

Tim Cook is the most egregious error, honestly not sure what I was thinking there. Arizona is not a strong running team and I knew there was going to be a three-way committee. Cook did get a goal-line carry, but was stuffed. Way too thin of a play to be in 40% of my lineups.

I poisoned every lineup with these flimsy plays. When they predictably didn’t hit and the guys I went heavy on also busted, it was over. After both ARI and ORL stacks failed on Saturday, I tilted and maxed out the Sunday slate to chase my expected losses. Bad emotional control.

After Gardner bailed me out last week, I went with a 100% fade this week – thinking that Terrell Watson would eat into his production and that he could not sustain his efficiency (in week 02, he had two touchdowns on only three red zone snaps). Watson vultured two 2pt conversions and siphoned 14 touches – but Gardner hit an 83-yard TD run anyways and was a must-have to win on the Sunday slate.

A few positives to take away:

I was shocked to see that Trent Richardson was only 51% owned in the Big GPP. I was expecting at least 80%.

I was even more surprised to see Mekale McKay at only 27%! These were about the only things I got right this week, locking those two into almost every lineup. They finished RB1 and WR3 (most points of the ‘expensive’ WRs) on the week.

Adam Levitan put it best when he talks about “prove it plays”. I tried to get fancy and find the magic $3k key to unlock a team full of studs. But I should have just said “prove it”.

The field didn’t prove it, but I failed to take advantage. The final numbers are ugly this week.

Ouch. Wiped out all my profit from weeks one and two.