After getting crushed last week, it was a bit of a “back to the drawing board” week.

I scaled back to a more comfortable entry size, while still getting to max enter the large GPPs I wanted to target. I also went back to building lineups by hand, instead of using projections and an optimizer.

I think my player pool selection was really good in the first two weeks, so I focused on making solid plays and tactical fades instead of having thin plays in nearly every lineup.

The “punt” plays I was working with were players like Trey Williams, Sheman Badie, and Devin Lucien – guys who still had touchdown upside, but also a non-zero floor.

One thing I wanted to do differently than last week was to take a stand on strong plays, instead of hoping I mix-and-matched the studs with the right punts.

I built ten lineups and ended up with these exposures:

Super tight player pool this week. I wanted full Wolford exposure at $5700 – probably not a great decision in hindsight, but I couldn’t get off of him to play Mettenberger for essentially the same price. Mettenberger and Memphis are still in “show me” mode for me. He got a somewhat flukey rushing TD, while Wolford had a bottom 30% outcome versus a bad Atlanta defense.

I put all my eggs into the Arizona basket. Pressley at $5000 was one of my favorite plays because the combination of Pressley and Wolford was so cheap for what should have been 75% or more of the Arizona TD equity. It was nerve-wracking watching the Sunday night game as Arizona played really poorly in what everyone thought was a “get right at home” bounce back spot.

Obviously, in hindsight, I would have liked to have more Charles Johnson over Trent Richardson – but both had less predictable outcomes. The Snow Game in Salt Lake could have made the whole game a wash, but the game played out basically like normal after half-time. Richardson got there, but I expected him to have much more volume against a bad San Antonio defense and no one saw Brandon Ross coming off the street to siphon touches from the Iron’s workhorse.

I lead the #FadeQuan charge and played zero Jaquan Gardner. Didn’t like his price and I talked last week about how he was in a similar spot to Zac Stacy after his 100 yard game. I ended up with zero Nelson Spruce, as well, mostly because his $6000 tag didn’t hit as nicely as Pressley or the other $4k-$5k backs.

With such a small player pool and massive exposure to a single stack (Wolford-Ross), it was bound to be an almost binary outcome this week. Either the stack hits and I cash everything or it busts and airball.

Wolford hit Ross for a 4th quarter touchdown and it was about an $800 swing (losing $200 to winning $600). Jhurell Pressley ended up as the RB1 and 80% exposure to him was a huge late boost for my lineups.

I had a bunch of lineups that could have taken down first place; my top scoring lineup had Branden Oliver – who was leading the backfield touches 28:1 before getting hurt, Bouagnon came in and picked up 9 fpts worth of work (including a TD). D’Ernest Johnson did not perform in the snow and sank a few Ross/Pressley/Charles Johnson stacks.

My fades of Garret Gilbert, Gardner, Spruce, Patton, Stacy, and Pierson-El all worked out. 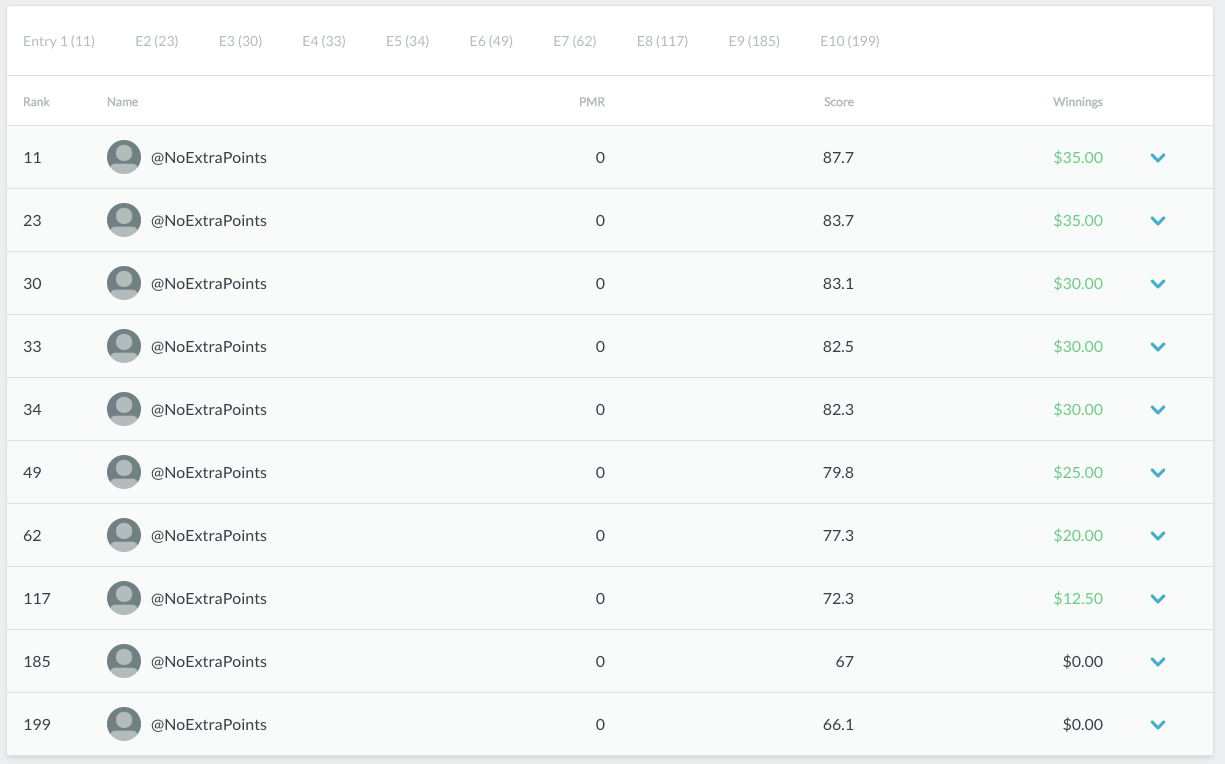 “When the ARI stack hits…”

I did solid work in all of the main GPPs I played this week:

Back into the green for the season!